If you watched the first Toy Story movie, you would remember that Andy’s next door neighbor, Sid Phillips (the kid who destroys toys for fun) had a vicious bull terrier named Scud. Though bull terriers are fiercely protective, they are great loyal companions.

Bull terriers are a breed of dog that belongs to the terrier family. They also called the gladiators of the canine race. Their distinguishing features include their large, egg-shaped head, jaunty gait and small, triangular eyes.

The term gladiator stems from the breed’s aggression in defending his or her owner. A bull terrier is known to be fearless, active and fun-loving and bonds well with their owner. Because of their nature, proper training and socialization is crucial. Male bull terriers may not get along with other male dogs; however, a male and a female, or two females can live together as long as there is supervision.

Bull terriers have appeared in many movies, TV shows and as a mascot. Famous people have owned bull terriers as well. Aside from Scud from Toy Story, famous bull terriers include Spuds MacKenzie, the mascot of Bud Light beer, Fuchs, owned by Adolf Hitler, and Meatball, owned by Major Gregory Boyington in the TV series Baa Baa Black Sheep.

Bull terriers have a short and dense coat which is easy to groom. Bull terriers are average shedders that shed their coat twice a year. Occasional brushing and combing of the coat will do.

Bull terriers are not suited for families with small children. Children should be instructed to display strong and firm leadership when handling a bull terrier. Passive owners may find bull terriers difficult to handle because they can get willful, energetic and stubborn without proper training.

Bull terriers are suitable for houses that have a fenced yard. They can live in an apartment but they will need a lot of exercise. They prefer to live in warmer climates.

Owners of bull terriers should watch out for skin allergies such as rash, hives or itching. Puppy owners should check if their dog is deaf, because deafness occurs in about 20% of bull terriers. Other common ailments include acne, obsessive compulsive disorder (self mutilation, obsessive licking or tail sucking) and umbilical hernia. They are also susceptible to heart defects, dislocated kneecaps and kidney failure. Bull terriers have an average life expectancy of 10-12 years.

Bull terriers require daily walks and vigorous exercise. If it does not get adequate exercise, the dog will become lazy and overweight.

Bull terriers are somewhat difficult to train so it is best to start when the dog is still young. Trainers should be firm, consistent and patient. This breed should know what the pecking order is so that the dog will be easier to train. This is not the breed of dog you can leave alone for long hours because they like constant interaction with their owners. 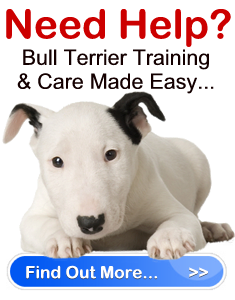